+35
I saw a tweet today (shown below) that reminded me of 27th August, 2012. This was the day that VMware published this article, which demonstrates how VMware vSphere (5.1 at that point) could achieve 1 million IOPS in a single VM. Things have undoubtedly gotten better in vSphere 5.5, and even more so with vSphere 6.0, which was recently released. Even though the test setup at the time (3 years ago) required two dedicated all flash arrays for this one VM, it demonstrated clearly that the hypervisor is not a bottleneck to storage. It also clearly demonstrated that even using VMFS and going through multiple layers to the storage and back, isn’t a bottleneck to high performance. vSphere itself adds so little overhead that it’s a great platform for running any workload.

This is important, because 3 years on from this test we have all sorts of things running on top of vSphere in the ever increasing capabilities of the platform. Even high performance storage controllers and not just the variety in the hyper-converged platforms, but also in mainline storage vendor arrays. But this article is more about demonstrating that vSphere is a great place to run databases, and I’ve used some results that I produced in my spare time last weekend.

Here is the tweet from Duncan Epping, Office of the CTO at VMware. It shows the path an IO operation might take through a virtual storage appliance. The appliance being just another form of high performance virtual machine, which as we’ve already covered, is quite at home running on VMware vSphere. 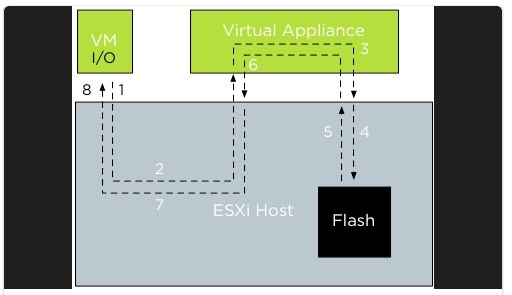 For my test environment I had a SQL Server 2012 template configured with 2 vCPU’s and 32GB RAM and a few hundred GB of disk (4 VMDK’s, OS, Data, TempDB, TLog). I decided to use the freely available Dell DVDStore to generate a workload on the databases, which simulates an online DVD stores transactions and is an OLTP type workload. One of the developers of the Dell DVDStore Benchmark is Todd Muirhead from the VMware Performance Engineering Team, and I recommend you review his work, especially on databases such as SQL Server and Oracle. Dell DVDStore can be used to test many different types of databases and works with Windows and Linux. Although this is a benchmark and the results aren’t necessarily real word, the goal was the demonstrate the scalability aspects of vSphere as a hypervisor.

This post first appeared on the Long White Virtual Clouds blog at longwhiteclouds.com via Michael Webster