+35
One of the things I’ve been working on since I started at Nutanix is the Nutanix documentation script. Luckily there already is an PowerShell framework to document AD, DHCP but also XenApp, XenDesktop and PVS for instance.

And with the current release of NOS 4.1.1 and Barry Schiffer’ NetScaler Documentation script I figured it would be a good idea to do the same thing for the Nutanix solution. The Nutanix management interface (PRISM) is a very powerful tool to get all information in a general overview.

This interface will give you access to both the REST API and the PowerShell CMDlets and these PoSH cmdlets are very useful and well written so I could easily use them in the base script. I wanted to thank both authors of the framework:


What’s currently in the script
SyntaxThe script is easy to use with just 3 mandatory parameters:

Nutanix_Script_v1_unsigned.ps1 -nxIP 1.1.1.1 -nxUser Admin -nxPassword ****
This will give you a word document which is (by default) called ‘Nutanix Documentation Script’ in the directory where you run the script.

If you want to incorporate all non resolved alerts and events the syntax would be:

Nutanix_Script_v1_unsigned.ps1 -nxIP 1.1.1.1 -nxUser Admin -nxPassword **** -full
RequirementsOn the machine you’d be running the script on you need:
The script should be started from the Nutanix CMDlets as this cmdlet icon will automatically load the appropriate commands.

The Nutanix CMDlets can be installed from the PRISM interface: 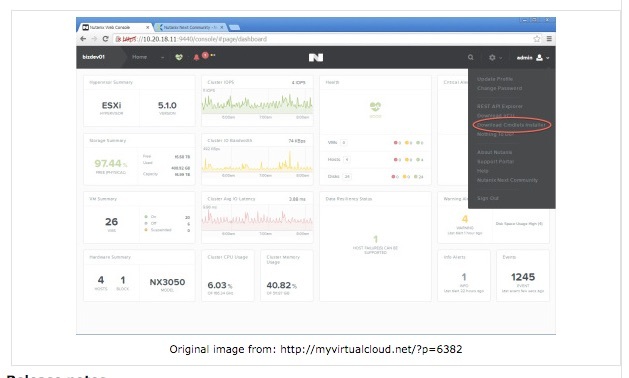 If you have any questions about the scripts or possible feature requests/improvements please don’t hesitate to leave a comment!

This is a repost from the blog My Virtual Vision by Kees Baggerman
Follow me on Twitter: https://twitter.com/AngeloLuciani
This topic has been closed for comments
M

I seem to be having one small problem: when I get to the part where I need to close word ==> the script hangs :'(
When I close word myself (from taskmanager), the script continues but then spits out this error:

I'm quite new to this but could you point me into the right direction?

Thanks a lot in advance!
Mathias

Can you tell us a bit more about your environment? Specifically:

I've seen this happening with unsupported Office versions or language packs that are not so common.

Thanks for stoppping by! :-)

The version of Word is 365 ProPlus.
No language packs installed, Dutch proofing-tools.
NOS is 4.1.4

On a side note: I also tried running the scripts with the -html option to try and bypass Word. I still get the write error however:

If you need any more info ==> please yell!

+10
Geen probleem! Responding in english as a reference for others as well, I've tested this with Office 2013 and the Dutch Language Pack (being Dutch myself it made sense) and that worked. Would it be possible to do spin up a VM and try a vanilla (maybe even manual) install of Office?

The HTML option is not working, there's a refresh in the works of the scripting framework that will make the -HTML feature work and do some more, that's still some months out tho.
Kind regards,Kees
N

+5
I've found with the 4.6.1 NutanixCmdlets a minor change is needed to this script, as the password now needs to be a securestring. Here's what i've added.

seems the cluster connect does no longer work when you have a cluster with AOS5, the document is empty expect the CmdLets version:
Nutanix Cmdlets InfoVersion Build Version REST API Version5.0 2.0-release5.0-dev-12152016 v1
Any hint how to fix this?

We've changed the connect-nutanixcluster to connect-ntnxcluster resulting in a failed connection, I need to find some time to update the script with some error handling and use both methods.
Kind regards,Kees

thx for your fast reply :)
A combination of both worked for me, thx to NoDowt for the $nxSecurePassword string.


Getting an unpopulated report and the following errors:

Not connected to any server. Please connect to a server and try again.

+5
I haven't tried it on 4.7, but most likely you'll just need to edit the script as per my details to use the securestring for the password...

Search the script file for "## Steven Potrais - Connecting to the Nutanix node"
Then, just above it add this:
##Convert password to securestring as required for v4.6.1 nutanix cmdlets - Jason Hall 10.06.2016$nxSecurePassword=ConvertTo-SecureString $nxPassword -AsPlainText -Force

That did the trick. Thank you much.
J

Sorry, I jumped the gun. I am getting the same connection errors. Below is the modifications I made to the script per your instructions. Is this correct? (Note some of the previous lines were commented out instead of deleted)

Still no connection. Thanks for your help. Below is current script portion

A combination of both worked for me, thx to NoDowt for the $nxSecurePassword string.