+1
The objective of this post is to provide inputs on requirement of using NFS exports. Nutanix Files implemented NFSv4 Support from Files 3.0.0.1 and since then Nutanix Files has come as a long way. Along with the release of Files 3.5, it now supports NFSv3 as well. They are enabled by default and depends on the NFS Client.

From 3.5 onward, V4 and V3 both are enabled by default. However, if you want to disable a specific version support based on requirement. It is achievable from UI.
Self Service Restore is supported on NFS based exports from Files 3.5 onward for legacy and new exports.

NFSv4
User Management Options :-
User Authentication Options:
NFSV3
NFSv3 Protocol is supported from 3..5.x on-wards. NFSv4 protocol is not supported on 2..2.x branches.
NFSv3 is a simple stateless protocol where the server does not keep state of individual files being accessed by clients.

Step 1 — Downloading and Installing the Components

On the client server, we need to install a package called nfs-common, which provides NFS functionality without including unneeded server components. Again, we will refresh the local package index prior to installation to ensure that we have up-to-date information:

Step 2 — Creating the Mount Points on the Client
Files is already configured and hosting its export, Now we’ll prepare our client.

In order to make the remote exports available on the client, we need to mount the NFS exports on an empty client directory.

Step 3 — Mounting the Directories on the Client
We can mount the shares by addressing our Files server IP address or using Files Server FQDN .

These commands should mount the exports from the Files onto the client machine.

You can double-check that they mounted successfully in several ways. You can check this with a mount command, but df -h will give you more human readable output illustrates how disk usage is displayed differently for the nfs shares:

Step 4 — Testing NFS Access
Next, let’s test access to the shares by writing something to each of them.

First, write a test file to the /nfs/general share.

Created the file as the client machine’s root user via the sudo command, ownership of the file defaults to -2, -2

What is root squash?

Root squash basically remaps the root UID from 0 to an anonymous user with no privileges. This means that root is stripped of all privileges and is not able to read any files which are not world read or write to any paths that are restricted.

code:
There are two directories in this example.

So the permission to root is not there, which is because of following setting.
Squash Type : ROOT_SQUASH, which is by default.

For example, root cannot create file in the dir owned by user piyush.

But once it's changed to "Squash Type : NONE", root user starts behaving like super user again.

This option is available as per Export basis and can be updated under Advanced NFS Settings.
﻿ 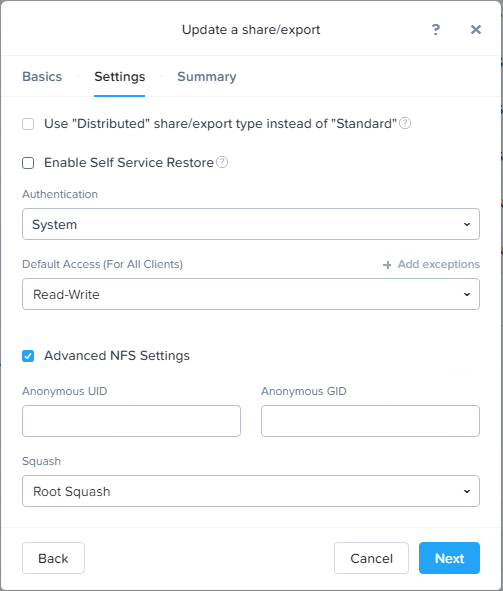 I mounted a distributed share/export NFS resource, with File System Compression enabled, with System Authentication  and with advanced NFS Settings  (Squash None).

The problem is that I can create a root folder (prueba) and create files inside and other folders without problem. But If i want to remove  the root folder created with the command rm -rf  I allways get the message “Device or resource busy” and I can’t remove the root folder.

Attached is a screen capture.