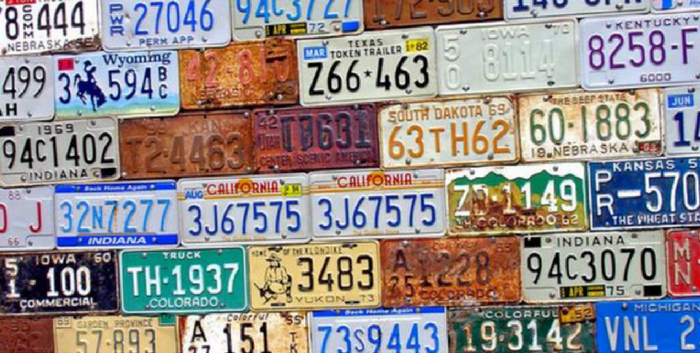 +35
This post was authored by Steven Kaplan, VP of Client Strategy at Nutanix

Decrypting Oracle software licensing has long been the bane of IT shops. VCE President, Chad Sakac, recently devoted a blog post on the challenges of Oracle licensing aptly titled, Oracle, I’m sad about you, disappointed in you, and frustrated with you. There are some definite steps, however, that Nutanix customers (including Dell XC and Lenovo HX) can take to help contain, and optimize, Oracle licensing on the Nutanix Enterprise Cloud Platform.

Nutanix is an Oracle Gold Partner and appears to be the far and away leader in running Oracle and Oracle RAC on HCI – which it has done in production for over two years now. I can find no published reference of another HCI product running Oracle RAC at all. Nutanix’s resiliency, performance, scalability, and product maturity tend to quickly capture customer business when evaluating HCI solutions.

At a high level, the advantages of the Nutanix Enterprise Cloud include:

Licensing Oracle in a virtualized environment is by server host or node. Once a customer licenses the cores/processors in the node, she can run as many databases as needed on that node. I recommend using processors with high frequency and low core count to minimize the number of licenses.

Oracle software licensing is typically processor & core-based in one of the following manners:

► Per-core: Technology (Database, Middleware, BI, etc) products. This is the most common model used for licensing Oracle. Oracle has certain multipliers based on the Physical Infrastructure like x86, Solaris, HP, IBM etc. You can find more details on the multipliers here (some products are licensed by physical socket vs physical core). 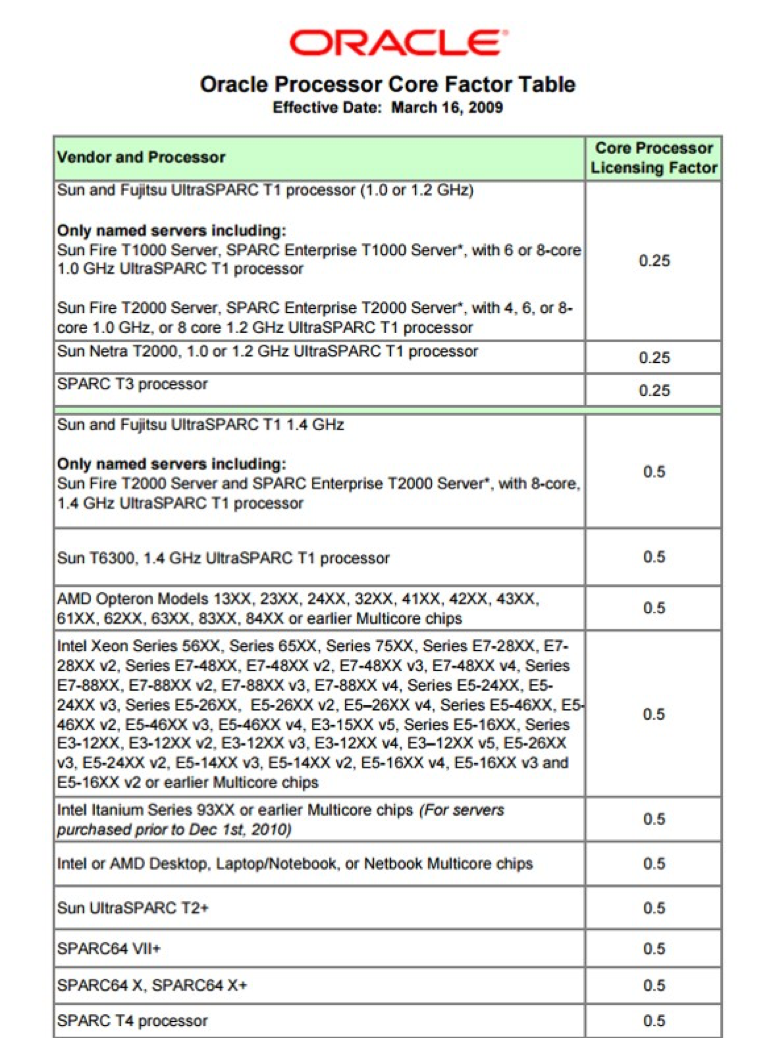 ► Named User Licenses: This is the most common licensing scheme used for deploying Non-Production environments, i.e. Dev/Test/QA. In this method, organizations are licensed by the number of users who are going to use the system.
► Unlimited License Agreement (ULA): Provides customers with an “all you can eat” buffet for a certain set of products. For example: Database and its Options, Middleware, BI, etc.
► Application Specific Licensing: This is the method by which application products/modules are licensed. For example: 50K payroll users, 500 financial users, etc.

An Oracle customer, for example, can have a 10-Node Nutanix Enterprise Cloud Platform and create a 2-Node ESXi Cluster for Oracle, a 2 Node ESXi cluster for SQL and a 6-Node ESXi cluster for general server virtualization. The environment still utilizes one Prism Console and one storage fabric, but isolated into multiple ESXi clusters for fencing or caging Oracle licenses. This layout is no different, from a licensing standpoint, than using a shared storage platform serving different ESXi clusters.

Fencing Oracle licenses makes it far easier to control how many cores a customer adds to the cluster when compared to legacy converged infrastructure environments. Maxing out resources for a storage and compute pod in a legacy 3-tier environment requires another pod.

Nutanix enables the ability to simplify the Oracle database layout:
Here are two Oracle ASM diskgroups where each diskgroup contains one or more Nutanix disk(s). There is no RAID to be configured.

The Nutanix platform operates and scales the Oracle Database in conjunction with the other hosted services providing a single scalable platform for all deployments. Customers can select any initial deployment size (with a minimum of 3 nodes) and grow in more granular data and compute increments.

Advancing technology benefits wrought by Moore’s Law enable an increasing density in VMs per node as the customer expands its Nutanix footprint over time – thereby reducing the Oracle licensing required. Licensing requirements may be further reduced by the ability to increase performance on existing nodes via seamless Nutanix 1-click upgrades.

Nutanix provides additional storage-only nodes that do not run Oracle software and only run Nutanix AHV as the hypervisor. This is a unique offering from Nutanix that eliminates the licensing for the storage-only nodes while enabling customers to start smaller and only add licensing as required.

Other benefits, breaking them out between “hard” and “soft” include:

Running Oracle software on bare-metal often results in low utilization rates. Virtualizing Oracle software to run on top of hypervisors such as ESXi, Hyper-V, Oracle VM, and Nutanix’s own AHV not only consolidates the footprint from an equipment standpoint, it can also significantly boost utilization – effectively freeing up licenses and resources to utilize for other projects.

Nutanix makes it very easy to virtualize physical servers. Unlike a legacy infrastructure environment, there are no centralized storage arrays or storage fabrics – and none of the administration – to worry about. Running Nutanix AHV additionally eliminates the requirement to purchase and configure separate virtualization software and the associated management package.

Oracle DB administrators can feel confident in virtualizing Oracle applications and databases on Nutanix due to capabilities such as crash-consistent and app-consistent snapshots. Administrators can put Oracle workloads in hot backup mode, do a snapshot and clone from the snapshot to create test/dev copies. Snapshots/Clones are native to the platform.

Tables 2 and 3 show the comparison vs. the former environment. 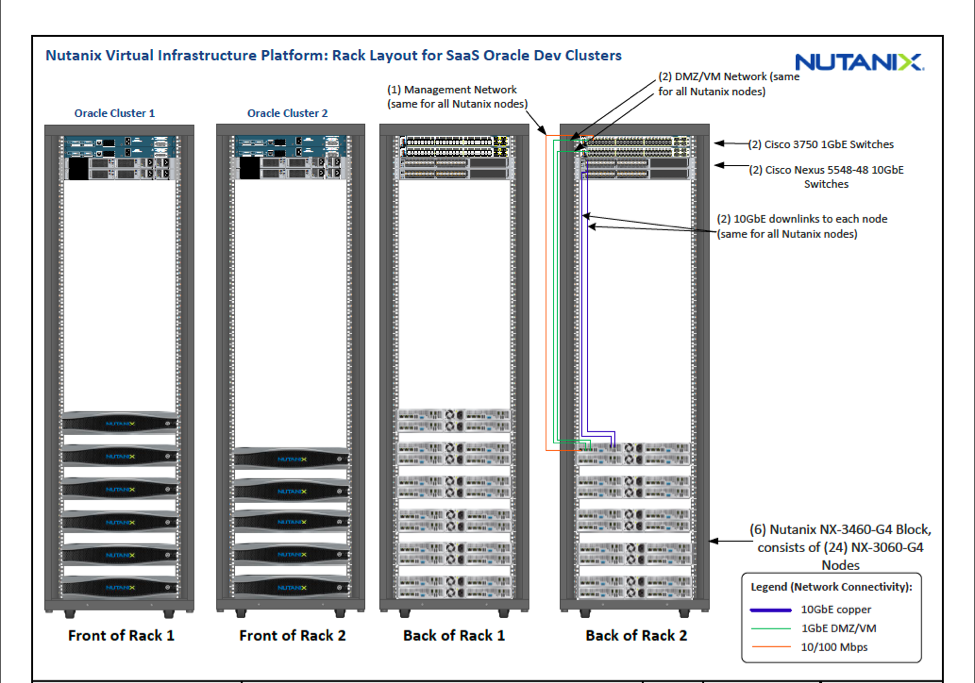 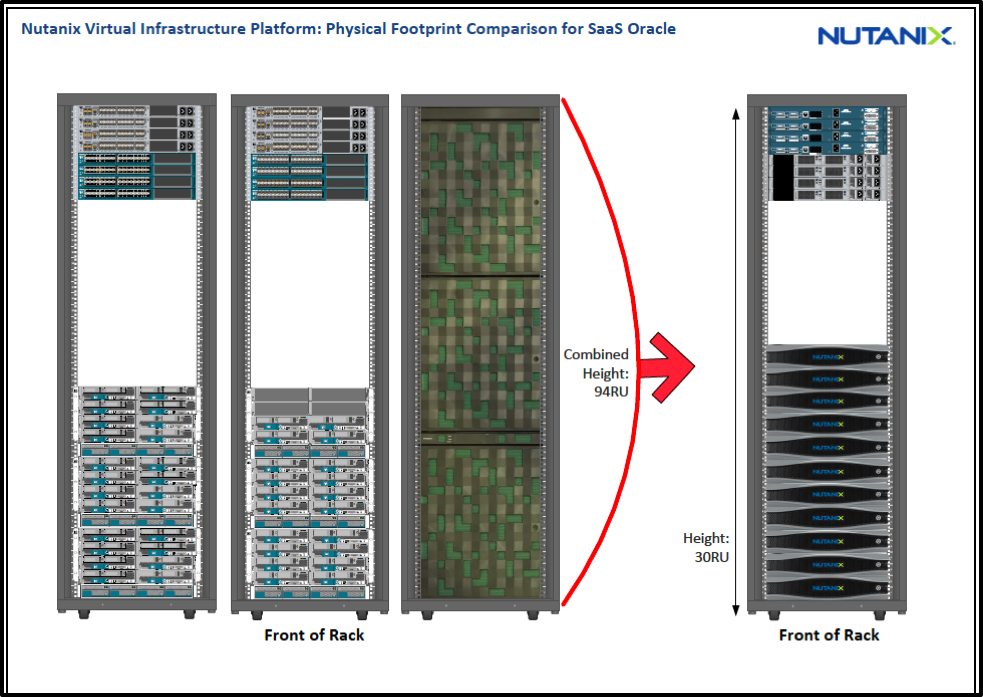 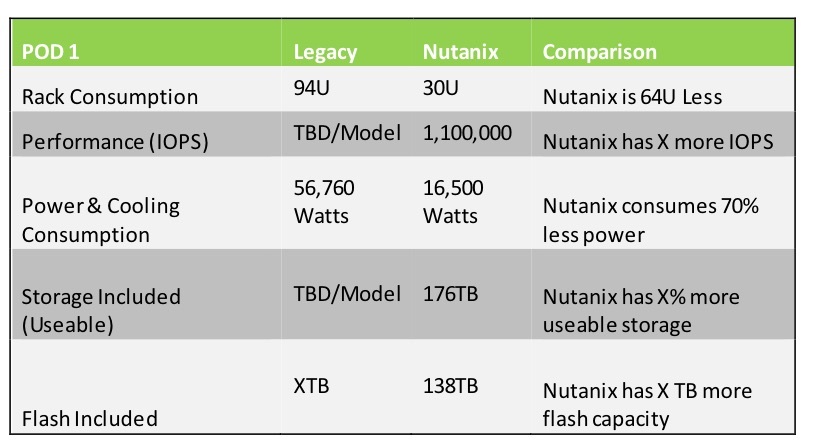 Let’s say we’re comparing a traditional 3-tier architecture running Oracle bare metal on AIX, HPUX, or another flavor of UNIX/Linux vs. running on Nutanix. In the case of the physical server, Oracle licensing is calculated as 1 Processor Core Factor, whereas on X86, it’s only 0.5 Processor Core Factor.

The EE Oracle DB licensing lists for $47,500. Adding EE options (OP) of Diagnostics ($7,500), Tuning ($5,000) and Partitioning ($11,500) comes to $24,000. We assume that we’re using 10 processor licenses whether physical or Nutanix:
Additionally, virtualization allows us to safely over allocate certain resources of a node. Assuming accommodation of 2 databases on the 10-core node effectively lowers the Oracle licensing costs to $187,750 per database, or 1/4th the cost of licensing Oracle on the physical 3-tier solution.

And unlike 3-tier, there are no additional capital costs for storage and switch fabrics. The associated rack space, power and cooling costs are slashed, and the administrative costs are dramatically reduced as Nutanix eliminates all storage-related tasks and can also automate tasks such as OS/firmware/hypervisor upgrades.

This document is for educational purposes only and provides examples of Oracle licensing costs based on publicly available information as of August 18, 2016. Nutanix is not affiliated with Oracle and does not control the price that Oracle charges for its products or services.

Disclaimer: This blog contains links to external websites that are not part of Nutanix.com. Nutanix does not control these sites, and disclaims all responsibility for the content or accuracy of any external site. Our decision to link to an external site should not be considered an endorsement of any content on such site.
Follow me on Twitter: https://twitter.com/AngeloLuciani
This topic has been closed for comments
W

+2
Is there someone in Nutanix (or a partner) who is able to certify a reference design/config to meet Oracle licensing requirements at that point in time? I am an Infrastructure Manager who is forced to support an Oracle implementation for two specific enterprise applications and I have run into a lot of confusion around licensing. As such, we are running OVM/Oracle Linux on top of traditional compute/SAN. I am about to make some decisions around platform change and would love to see if Nutanix would be an viable solution from Oracle's perspective.

Could you please also connect me with someone which has experience dealing with oracle licensing on nutanix.

+35
Hi embedded Thanks for connecting, I'll ping someone to reachout - Thanks
Follow me on Twitter: https://twitter.com/AngeloLuciani
Powered by inSided