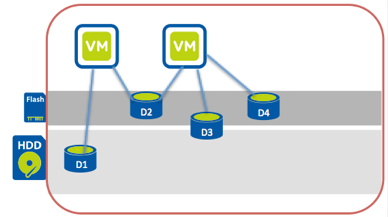 +35
The Nutanix Xtreme Computing Platform includes an information lifecycle management (ILM) service that automatically moves data between the hot and cold tiers. However, some users prefer all-flash performance for specific workloads within a hybrid system. In this situation, data for business-critical and latency-sensitive applications does not migrate from the SSD-backed, hot data tier to the cold data tier, which uses HDD (spinning) disks.

No more than 25 percent of the available DSF SSD capacity can be used for the VM Flash Mode feature. There will be no specific partition in the software set aside for this purpose and thus space not used by VM Flash Mode is used for other purposes. VM Flash Mode uses the SSD part of the Nutanix extent store capacity and is completely controlled by software.

VM Flash Mode can be configured for the entire virtual disk (or disks) or a portion of the virtual disk, specified using GB. DSF assigns data to the hot tier based on a first-in first-out (FIFO) basis when using the portion configuration option. If SSD space is available, data in excess of the minimum VM Flash Mode configuration requirements can reside in the hot tier. ILM does not migrate data for powered off virtual machines using VM Flash Mode to the cold tier.

For shared virtual disks, the VM Flash Mode configuration is visible via all the virtual machines sharing the respective virtual disks.

Nutanix stores two or three identical blocks of the same data, depending on Nutanix container configuration. For new writes, either two or three blocks are included in VM Flash Mode. However, when data is migrated from the cold to hot tier, only the local data copy is moved, which saves additional hot tier capacity.

During a node failure scenario, the available SSD capacity is reduced. This can lead to a situation where more than 25 percent of the SSD tier is pinned to SSD by VM Flash Mode, as in the following example:


When the failure scenario appears, the soft limit increases to 50% (900 GB instead of 450 GB) of total SSD capacity and thus data will not be migrated from the hot tier to the cold tier. DSF migrates data from the hot to cold tier during a node failure when VM Flash Mode uses more than 50% (900 GB) of the SSD space.

ncli virtual-disk update-pinning id= tier_name=SSD-SATA pinned-space=Note: If the entire disk is configured for VM Flash Mode, there is no need to run the command again if the virtual disk is extended; the new size is included automatically.

Use the following command to find the virtual-disk-id required for the configuration:

The configuration can be verified via the two following options:

The VM Flash Mode feature is hypervisor agnostic. You can take advantage of the feature when running any of the supported hypervisors:


This section outlines the interoperability for VM Flash Mode and some of the many features available in the different supported hypervisors and in DSF:

The Nutanix Xtreme Platform has built-in monitoring associated with VM Flash Mode in both Nutanix PRISM and the Nutanix Cluster Check (NCC) tool.

The following alerts are built in to PRISM and NCC:

Additional monitoring is available via cli and two useful commands are listed below:

Before enabling VM Flash Mode, consider using Nutanix data reduction technologies such as compression, deduplication and EC-X, as they increase the usable SSD tier. This allows ILM to maintain more data in the hot tier, giving all flash performance to a larger working set.

Nutanix support may recommend using VM Flash Mode to increase performance, since hot tier capacity might be allocated for workloads that do not require hot tier performance.

Following are a set of useful guidelines for implementing VM Flash Mode:


VM Flash Mode should be used as a last resort, as it reduces the ability of the DSF to manage workloads in a dynamic manner.

We strive to ensure that the information contained in this blog post is accurate at time of publication and up to date - the info is subject to change.
Follow me on Twitter: https://twitter.com/AngeloLuciani
M

+1
How to disable it back?
Pinning cant be used with starter license now

+6
Hi, mfauzan have you upgraded to AOS 5.0 and if so did you follow the below outlined procedure in the Flash Mode Best Practices Guide:
If you don't have Ultimate license you should not enable Flash Mode meaning skipping the last two steps.