+35
This post was authored by Vishal Sinha VP, Engineering at Nutanix

Failures can happen at any level in a data center. Disk drives can fail, nodes can become physically damaged, or the entire data center can go down due to disaster. Beyond that, data can be lost due to human activity; it can be deleted, overwritten unintentionally or become corrupted by malware. Nutanix Files, with its layered data protection solution, ensures your data is safe.

Disk Failure - If a disk fails, data is automatically accessible from other nodes in the cluster without impacting performance from the user’s perspective. The Nutanix platform does not rely on HW RAID for protecting drives. Once a failed drive is replaced, rebuilding data on the new disk drive is fast as all other nodes in the cluster work simultaneously to rebuild the missing data on the new drive.

Node Failure - Data availability in case of a node failure is no different. If a node goes down, data is still available from replicas on other nodes. When the failed node is replaced, data is rebuilt on the new node in parallel.

Block Failure – Nutanix clusters including Nutanix Files clusters are "block aware", which means that redundant copies of any data required to serve I/O are placed on nodes that are not in the same block.

A block is a rack-mountable enclosure that contains one to four Nutanix nodes. In multi-node blocks, the power supplies and the fans are the only components shared by nodes in a block. Without block awareness, a Nutanix cluster can tolerate the failure only of a single node. With block awareness, in the case where multiple nodes in a block fail, the cluster can continue to run because cluster configuration data exists on other blocks. Guest VMs can continue to run because redundant copies of guest VM data and metadata exist on other blocks. This feature is enabled automatically when certain criteria are met.

Admins only need to configure the schedule at which they want to take the snapshot of the data, the retention policy specifying how long to keep this snapshot, and location of the snapshot i.e. whether to keep the snapshots locally, on the same cluster, or at a remote site. If the choice is a remote cluster, changed data will be replicated to the remote cluster. With support for one-to-many, many-to-one and many-to-many replication, Admins can protect all the workloads across all the sites.

Again, since data is deduped and compressed over the wire, network and storage resources used are significantly reduced.

Most of the existing solutions rely on 20+ year old NDMP technology, which does not scale to support modern, multi-head backup servers and scale-out File Servers such as Nutanix Files.

Nutanix Files provides Changed File Tracking (CFT) technology, which enables parallel and concurrent backup of a Scale-out File Server using the underlying snapshot technology. Some of the key benefits of CFT technology are:

“In use” files backup: With many traditional backup solutions, “files in use” are not backed-up. With CFT, every file or directory, irrespective of their state will be backed up.

Smart Incremental backup: CFT keeps track of all the changes to the files and directories since the last snapshot and allows users to backup only the incremental changes. Older technologies such as NDMP require a scan for all changed files every time a backup is initiated slowing the backup process down. Changed File Tracking leads to a dramatic reduction in time to backup and the amount of space required.

Fast backup: CFT enables not only multiple concurrent streams to a single file-server VM but also multiple parallel backup streams to all the File Server VMs. So, for example, in a Nutanix Files cluster of 16 FSVMs, assuming a concurrency level of 2 backup streams per FSVM, one can have 32 backups going on in parallel on the same file server.

To back up a file server using CFT, a backup server first takes a full backup. After that, it asks the file server to take a new snapshot and give a diff of files and directories that changed since the last backup. Once the backup server has the list of changed files, it can do parallel and concurrent backups of the files and directories as shown in the picture below. 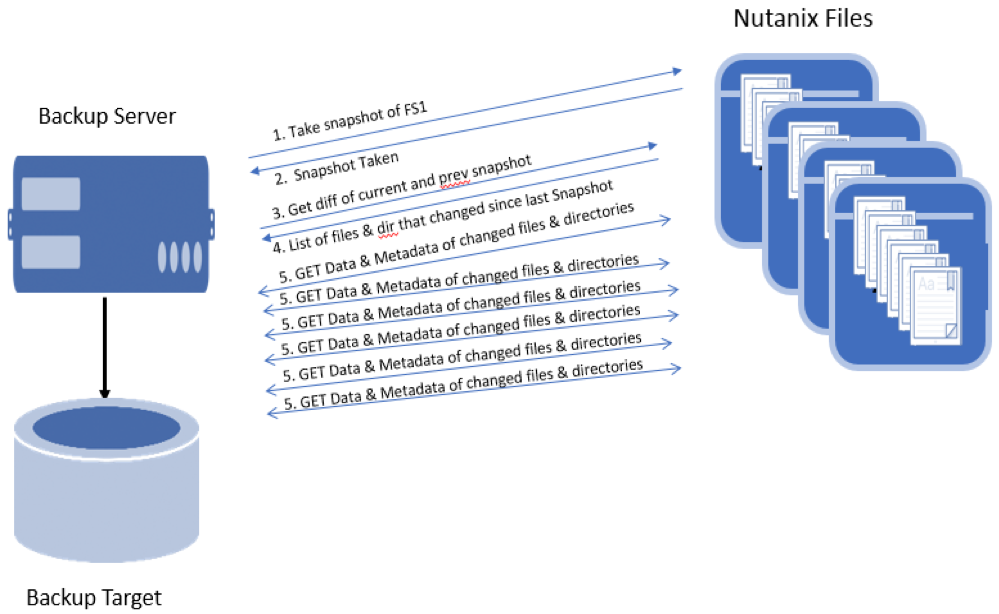 Data Protection against accidental user errors, or from malicious attacks

Data loss due to accidental deletion or due to malicious attack such as ransomware are common. Nutanix Files provides Self-Service-Restore (SSR) feature, which allows users to open, copy, and restore a previous version of a file using Windows Previous Version (WPV) for SMB or .snapshot directory for NFS.

Admins can configure SSR at a file server level or at a share level. SSR schedule configuration is available for all shares and allows users to configure different schedules for individual shares. The SSR snapshots are read-only and point-in-time copies. The picture below shows how to restore a previous version of a file in Windows OS.

2018 Nutanix, Inc. All rights reserved. Nutanix, the Nutanix logo and the other Nutanix products and features mentioned herein are registered trademarks or trademarks of Nutanix, Inc. in the United States and other countries. All other brand names mentioned herein are for identification purposes only and may be the trademarks of their respective holder(s).
Follow me on Twitter: https://twitter.com/AngeloLuciani
This topic has been closed for comments
P
Great article on Nutanix files and the data protection use cases. I could not agree more on leveraging the change file tracking (CFT) APIs to provide optimal backup and protection while reducing the backup window significantly. https://www.hycu.com/blog/optimizing-nutanix-afs-with-hycu-data-protection/ In a post I wrote back in July, I outlined how HYCU leverages the CFT APIs allowing for up to 90% reduction in the typical backup window. Providing a smart incremental backup from the last snapshot and allows users to backup only the incremental change.
Powered by inSided