With all of the benefits brought forth by virtualization over the last decade and a half including consolidation, better ROI, higher availability - the threat landscape has expanded. Virtualization was not designed with security at the forefront. As we see progression towards application mobility and hybrid clouds it's imperative that security is part of every design, enforcing policy for applications at the most granular levels. (Forrester Research's Zero Trust Model) 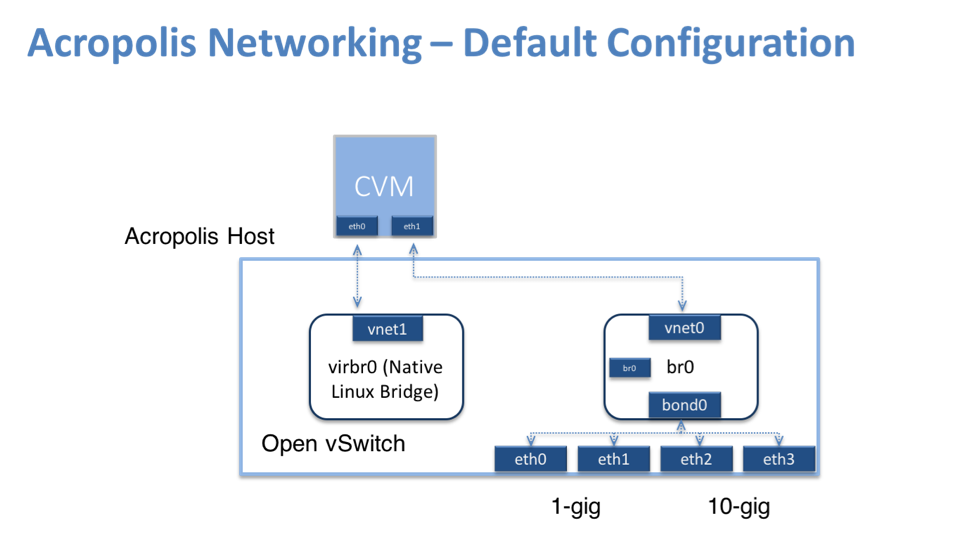 By default, AHV has two OVS bridges - virbr0 and br0. Vribr0 is used for storage I/O and has no connectivity to the outside world, while br0 is used to connect user VM’s, as well as the external interface of the Nutanix Controller VM (CVM), to the physical NICs and the outside world. With the desire to implement security policy between VMs on the same L2 domain, effectively isolating networks Process and Control VM’s, we’ll want the end state to look something like this. 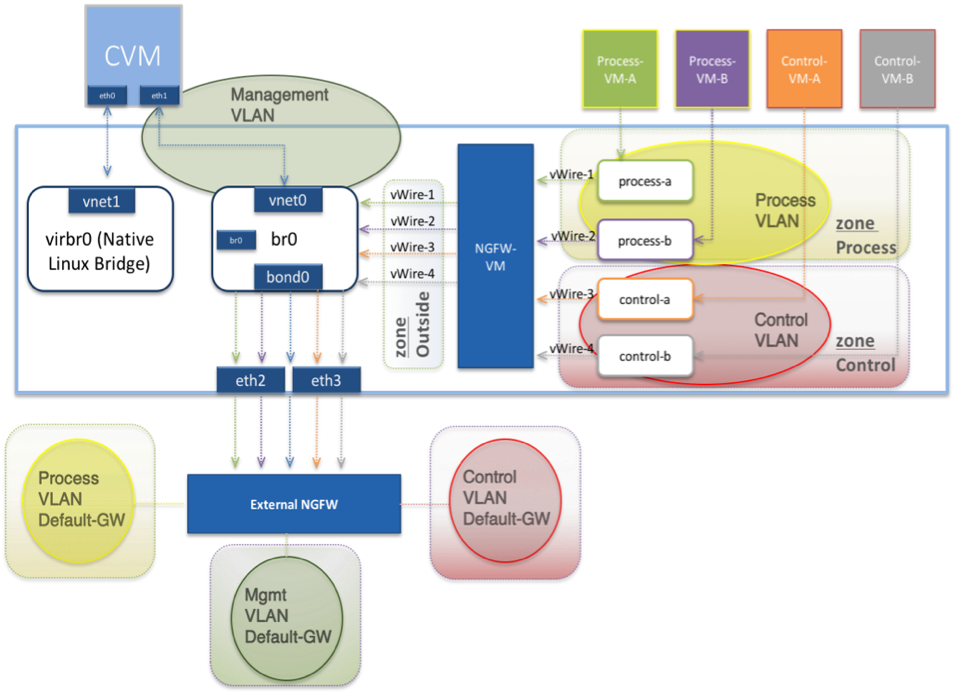 So how do we get there? With Nutanix and AHV, simply run a few scripts and the entire infrastructure is configured securely within minutes.

First, let’s configure the OVS bridges. SSH into any of the Nutanix Controller VM’s (CVM’s) in the cluster, and run the ‘allssh’ command specifying the names of the desired OVS bridges. 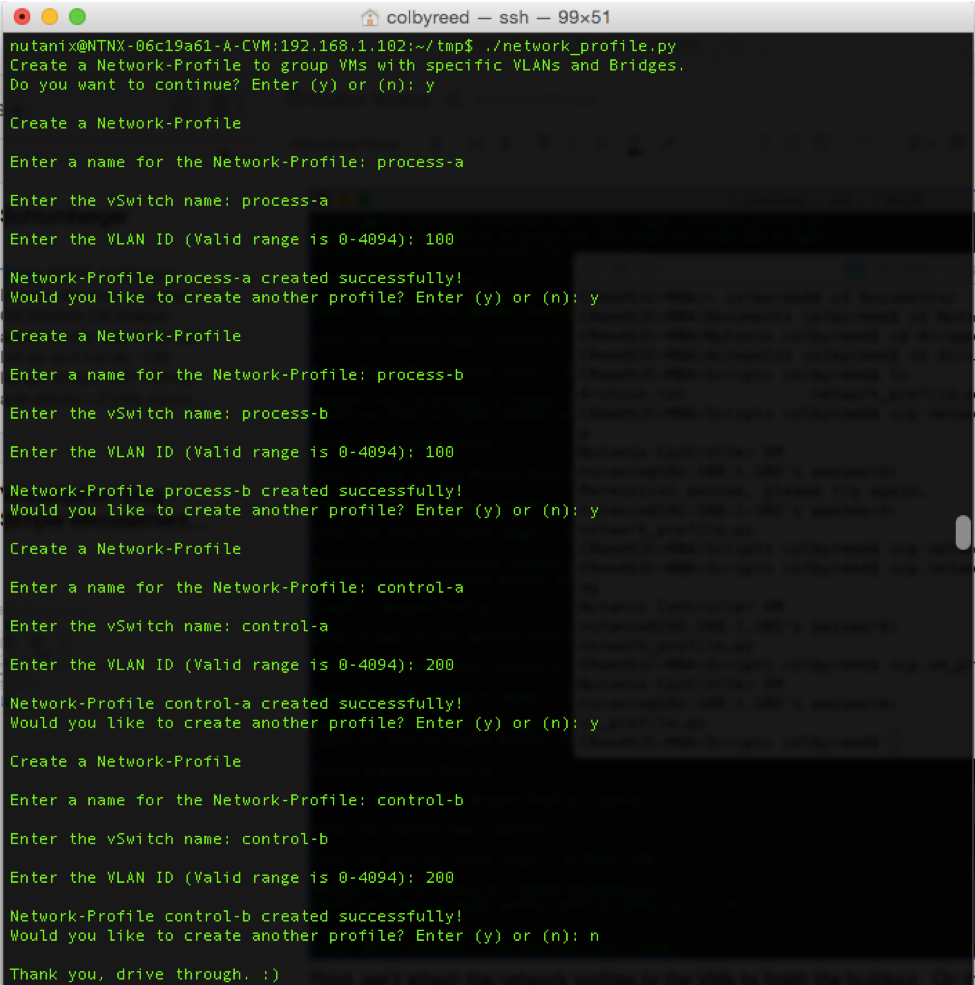 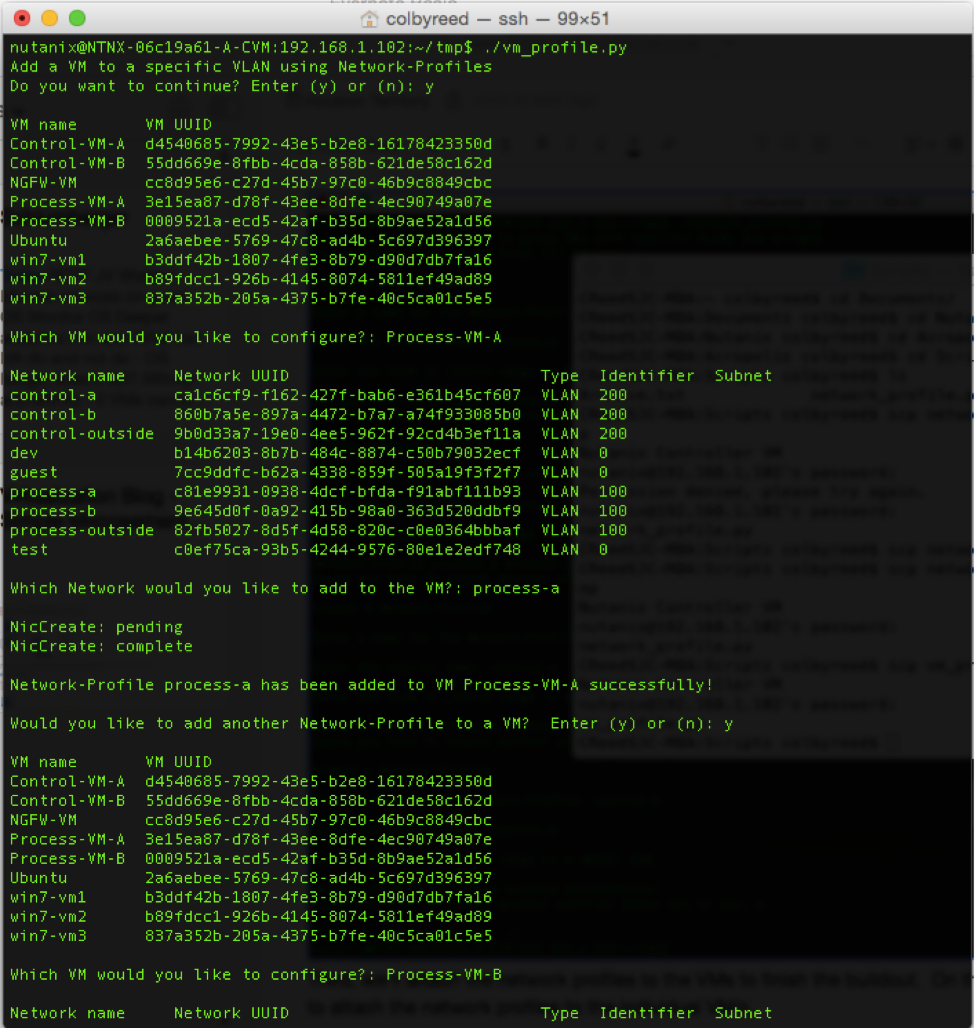 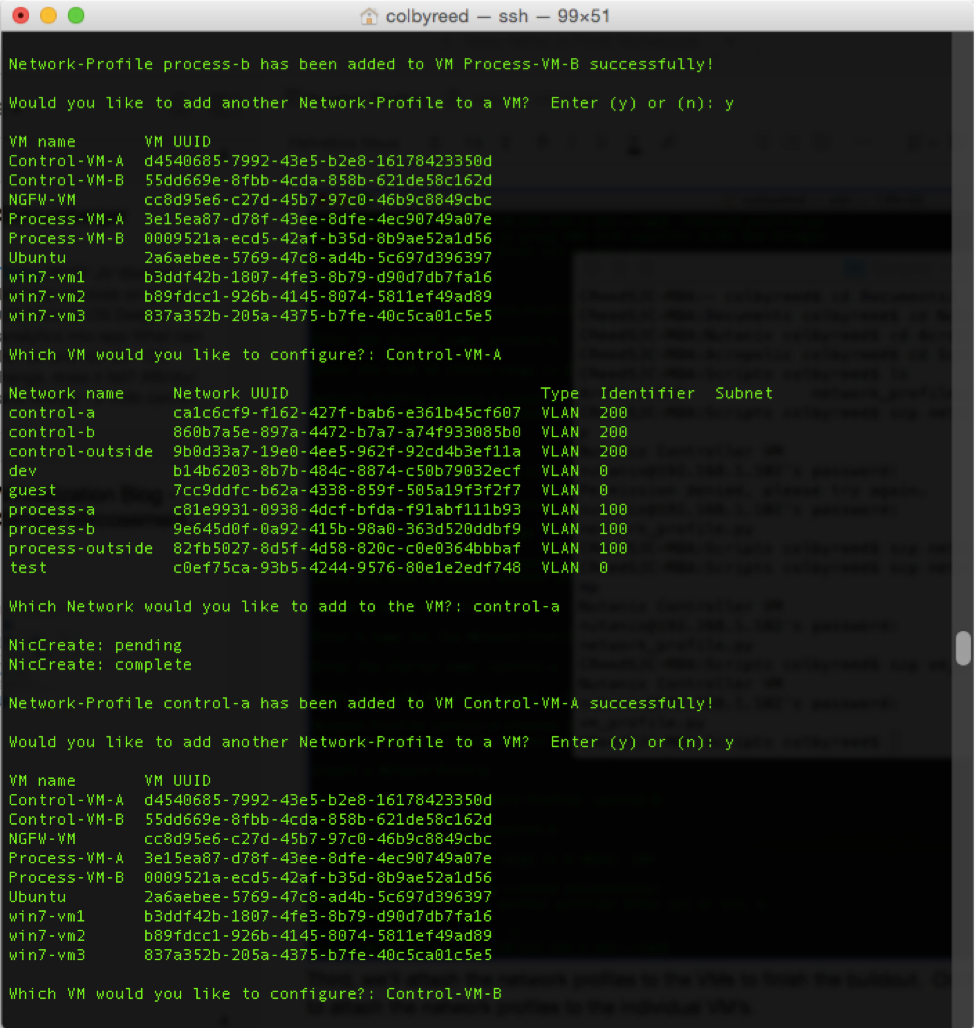 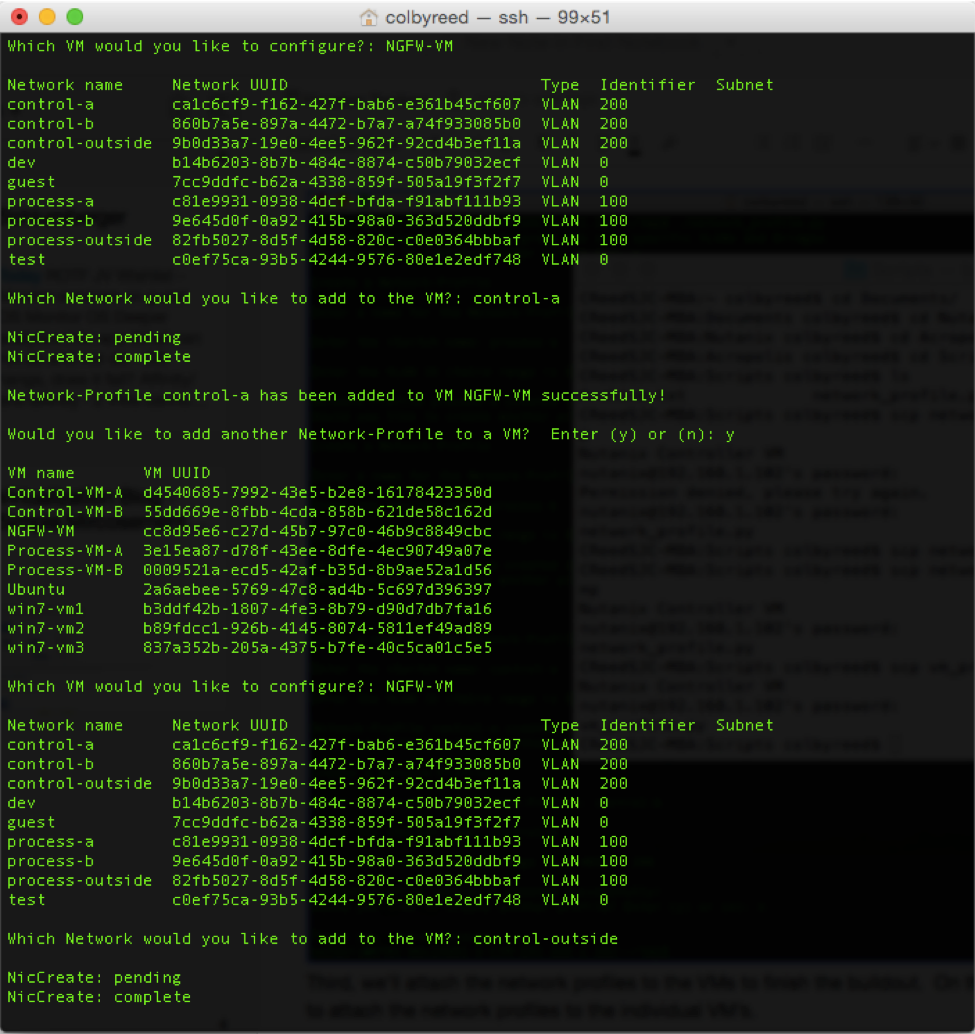 Last but not least, run the allssh script on the same CVM to add the appropriate VLAN tags to all trunks across the cluster, configure the security policy on the Palo Alto Networks Virtualized Next-Generation Firewall and start testing! Here we’re using an external Palo Alto Networks Virtualized Next-Generation Firewall as the default-gateway in Layer3 mode, and we’ve pruned the trunks to allow only the Process and Control VLANs -100 and 200, respectively - while the management traffic passes untagged.

Once the trunks are configured, validate the guest VM’s and their network associations from the Acropolis command line (acli). 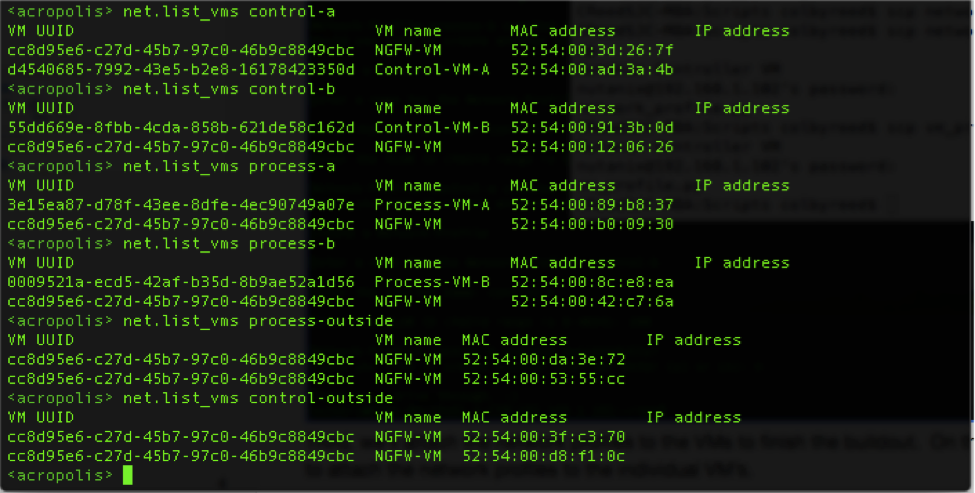 Now that the guest VM’s and network-profiles have been validated, our final configuration looks like this: 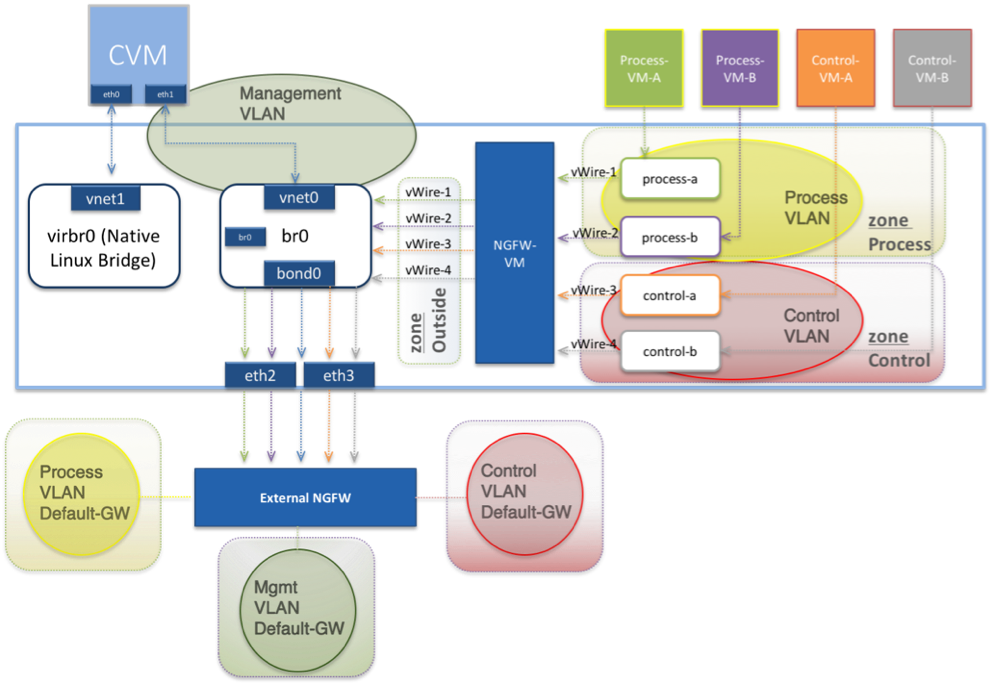 For more information, download the Palo Alto Networks and Nutanix Solution Brief or visit http://www.nutanix.com/products/acropolis/
This topic has been closed for comments
E

+1
Where can the 'network_profile.py' script be found? I cannot find it on my Acropolis installation.
R

Here is a copy of network_profile.py and vm_profile.py. You'll need to modify the permissions in order to execute the scripts - chmod u+x.

#This script starts with prompting the user to continue or end.

#The input is used as a conditional statement to loop.

print("Create a Network-Profile to group VMs with specific VLANs and vSwitches.")

#Prompt user to continue or end

#This script starts prompting the user to continue or end.

#The input is used as a conditional statement to loop.

#prompt user for the Network-Profile name

profile=raw_input('Which Network would you like to add to the VM?: ')

#notify user the VM has been modified successfully

#prompt user to continue or end