+35
This post was authored by Jason Burns, Senior Solutions & Performance Engineer at Nutanix

Over the last few months, I’ve had a chance to work with the Avaya Virtual Services Platform (VSP) switches. In this blog I wanted to capture the best practices when using the Nutanix Xtreme Computing Platform with Avaya VSP 7000 and 8000 network switches.

The Avaya VSP provides high-throughput, low-latency, top-of-rack (TOR) switching for Nutanix clusters utilizing 10 Gb Ethernet interfaces. In addition to performance testing, I have also tested node addition in the Avaya switching environment, which is seamless due to Nutanix auto discovery.

Figure 1 below illustrates possible network connections to a Nutanix node. 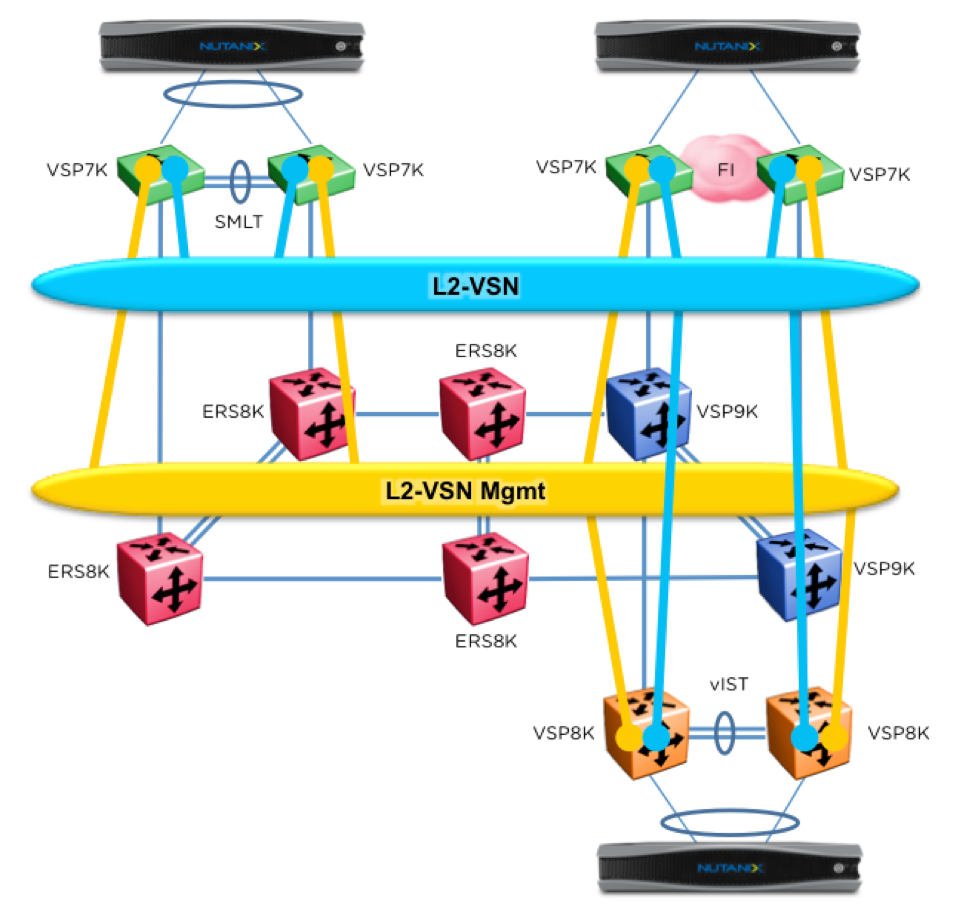 The right side uses traditional leaf-spine architecture with a maximum of three hops between Nutanix nodes. The left side shows Nutanix nodes joined to the cluster, but separated by several low-latency hops across the Avaya Fabric Connect backbone.

Avaya Fabric Connect allows greater network flexibility with lower administrative overhead than typically associated with a real world VM-centric network. In a traditional spanning tree environment, multiple redundant links would be blocked to prevent loops, decreasing available bandwidth. Fabric Connect enables redundant links by using the IS-IS protocol and Shortest Path Bridging (SPB) to prevent loops while keeping bandwidth available. Even better, new Virtual Service Networks (VSN) and VLANs added to the edge of the network are dynamically available without any extra configuration in the core network. In the example here, VSNs were extended for VM and management traffic so the new nodes on the left could be quickly discovered and added to the Nutanix cluster. No more error prone hop-by-hop switch configuration required!

In Figure 2, every network device is part of the FC backbone, and the Layer 2 Virtual Service Networks (L2-VSNs) bring the required VLANs to the access layer.

Avaya Fabric Connect provides data center and network administrators the flexibility to expand beyond leaf-spine architectures while still providing optimal performance. Since Fabric Connect is a core network technology between switches, no additional configuration considerations are required at the Nutanix node level.

Connecting a Nutanix cluster to an Avaya FI Mesh switch fabric does not require any additional VMware or Nutanix configuration, as long as administrators do not use link aggregation. When using FI Mesh, the switches are separate devices at the MAC layer. Network links from Nutanix nodes can be active/active connected to separate VSP switches and standard vSphere load balancing recommendations will apply.

Using Split Multi-Link Trunking (SMLT) between two VSP TOR switches causes the switches to appear as a single device performing link aggregation. A link between switches passes information back and forth to maintain the appearance of a single switch at the MAC layer. 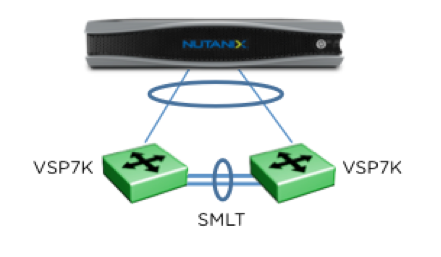 Nutanix does not recommend link aggregation between Nutanix nodes and VSP switches, but in certain situations, such as when the bandwidth of multiple links is needed for one virtual machine, it may be a useful tool. See VMware vSphere Networking on Nutanix for a more detailed explanation of recommended networking configuration.


Additional vSphere hypervisor networking configuration is required when using link aggregation technologies. Administrators must select the IP Hash load balancing method and use the vSphere Distributed Switch on the ESXi host. This allows the VMkernel to accept inbound connections to the same MAC address on both physical links, which is not possible in certain versions of vSphere when using the default load balancing methods. See this VMware KB article for full configuration details and requirements for supporting link aggregation in vSphere.

Here’s a summary of recommendations when using Avaya VSP switches.


Fabric Interconnect
- No special considerations unless link aggregation is configured

I’d love to hear from you. Please email us at info@nutanix.com or reach out to me on Twitter at ﻿ with feedback on this blog or to setup a customized 1:1 technical briefing on leveraging the power of simple network design and web-scale architecture for workloads such as unified communication, call center, and enterprise applications.